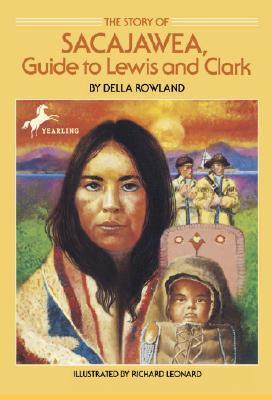 SACAJAWEA, A Guide to Lewis and Clark

Long ago, safely nestled in the valley of the Bitterroot Mountains, in what we now know as the state of Idaho, was a large village of Shoshoni Indians. In this village lived a young girl who would become famous around the world. Today, we know her as Sacajawea — a name that came from a tribe different from her own. Then, when she was still a young girl, she might have been known as Huichu, meaning Little Bird. This was a common name given to Shoshoni girls. According to Shoshoni tradition, she would have had several different names throughout her childhood.

In 1800, Little Bird was celebrating her twelfth summer. Although she didn’t know it, her way of life would soon change. That summer, another tribe would kidnap her and take her far from her home to a village on the Missouri River near St. Louis. Soon after, the white Americans who lived far to the east would come west. Her life and theirs would become closely bound and, together, they would make an important contribution to American history. They would all be part of a group called The Corps of Discovery, sent by President Thomas Jefferson to explore the huge piece of land the United States had just bought from France called the Louisiana Purchase.

This biography for ages 7-13 is the Winner of the 1990 Maine Student Book Master List and part of Fifth Grade Humanities curriculum in many school districts. A likeness of Sacajawea and her baby Pompei are featured on a dollar coin issued in 2000. A Ken Burns television documentary was one of several programs commemorating the 100th anniversary of the Lewis & Clark expedition.

SACAJAWEA, A Guide to Lewis and Clark
In 1805, 16-year-old Sacajawea, a Shoshoni Indian, left St. Louis with Lewis and Clark to explore the Louisiana Purchase and help obtain horses from her tribe in Idaho. Carrying her newborn son on her back, her courage and contributions to the two-year expedition surprised the entire corps.

It Happened At Woodstock
In simple terms, this forthcoming picture book tells the story of the world-famous 1969 music festival, emphasizing the surprising size and peaceful nature of the event, with collage artwork using iconic photos of Elliott Land, official Woodstock photographer.